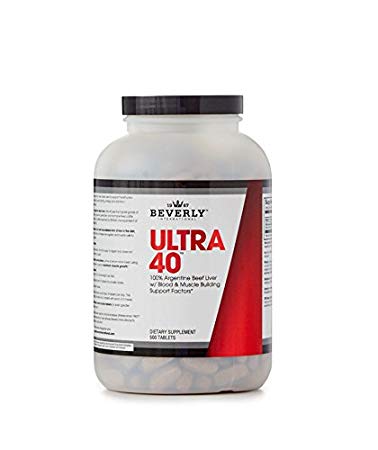 Desiccated Liver has been a training secret used by thousands of bodybuilders for more than four decades! Why? Because it works … naturally!
Category: Beverly Tags: Muscle Build, Protein, Recovery

All of us have gotten carried away at one time or another with trying to find that one magical or secret supplement that will give us the incredible muscle and strength gains that we’re more than willing to work so hard to achieve, but just don’t seem to come quick enough. Some of the newer supplements on the market (creatine being the best example) do work incredibly well for many people. However we always remind our clients that for continued gains they must stick with the basics of good bodybuilding nutrition. And for more than four decades desiccated liver tablets have been a mainstay of good bodybuilding nutrition.

What: Ultra 40 is a nutrient dense protein food (in tablet form) derived from raw Argentinean beef liver that is concentrated by vacuum drying at a low temperature. It is free of fats, carbohydrates, and any food additives.

Who: Anyone who wants to increase lean body mass, people who want more energy, anyone on a restricted diet, as well as those who are clinically stressed.

Why: Ultra 40 comes from grass fed, steroid free Argentinean beef and is the most potent liver product on the market. The concentration process removes unwanted calories and the addition of B-12 enhances protein metabolism.

How: Beginners start with 6 tablets per day, one or two tablets with each meal or shake.

Intermediates and advanced take one tablet per every 10 lbs of bodyweight divided over four to six meals (and shakes).

If we could turn the bodybuilding clock back a few decades, we would be able to clearly see how liver came into prominence as a sports nutrition supplement. Stories from some of the old timers telling of phenomenal gains being made on 100 plus liver tablets a day are very common. (These were the 7.5 or 10 grain tablets, an intake of 25 -30 Ultra 40 tablets per day would equate to this amount due to the higher potency now available.) Strength, size, and endurance increases are always reported when an individual gets on a good quality desiccated liver supplement.

Ultra 40 liver tablets are one of the most potent training aids for the bodybuilder. The formula is an extract which contains only trace amounts of fat and cholesterol, but forty-five times the nutritional value of whole beef liver, yet with all the nutrients and enzymes of raw liver.

Ultra 40 has more going for it than any other food supplement being very high in useable bodybuilding protein (2 grams per tablet) of the highest quality (it contains all the essential amino acids). It’s a strong blood builder supplying heme iron. It is a very rich source of B vitamins, especially riboflavin, niacin, B-12, and the lipotropics choline and inositol. It’s a good source of vitamins A, C, and D and other micro-nutrients. Ultra 40 is also extremely rich in minerals such as the anti oxidant selenium, phosphorous, copper, zinc, and GTF chromium (insulin regulator).

In addition to these known nutrients, there are substances present in liver shown to have a beneficial effect on health, fitness, and endurance such as cytochrome P-450 and others that have yet to be identified.

According to Vince Gironda, the “Iron Guru”, desiccated liver contains nucleic acids for proper amino-acid utilization, a growth factor and an anti-estrogen factor, which keeps testosterone levels high, and it is also a great anti-toxin.

In a classic experiment, Dr. B. H. Ershoff demonstrated that liver extract was able to boost strength, endurance, performance, and resistance to stress and disease. In a nutshell here’s how this occurred:

Dr. Ershoff took three groups of rats and fed them controlled diets for a twelve week period. Group one ate a basic diet fortified with vitamins and minerals. Group two ate as much as they wanted of the same diet plus B vitamins and brewer’s yeast. Group three ate the basic diet but had 10% desiccated liver added to their rations.

Then the doctor placed the rats one by one into a drum of water, out of which they could not climb. Therefore, it was either swim or drown. The group one rats swam an average of 13.2 minutes before they all drowned. Group two, an average of 13.4 minutes. Group three, however, were still swimming at the end of two hours, at which time the experiment was concluded. Now either the group three rats had watched the fate of their counterparts very closely, or the liver had something to do with them swimming almost 10 times as long. As far as we know, no other supplement has even come close to liver in improving endurance.

How does Ultra 40 work in the real world?

Although once considered a panacea among bodybuilders, desiccated liver’s reputation has recently been demeaned by some. However, it has proved time and again invaluable in breaking strength sticking points as well as contributing to improved energy flow on a restricted diet. In short, Ultra 40 produces results.The amount of Ultra 40 that you should take depends on your level of training and energy needs. Beginners can start at six tablets per day (two per meal), and intermediates should take no less than six liver tablets per meal over three meals or 3 – 5 tablets per meal over 5 – 6 daily meals. Start with 1 – 2 per meal and every week add an extra tablet until you reach the desired level. Advanced bodybuilders make fantastic progress on 30-40 liver tablets per day over periods of time. These amounts allow you to take in tremendous amounts of protein and nutrients without large amounts of food. You should build up gradually to this amount to avoid upsetting your digestion.

Be the first to review “Ultra 40” Cancel reply