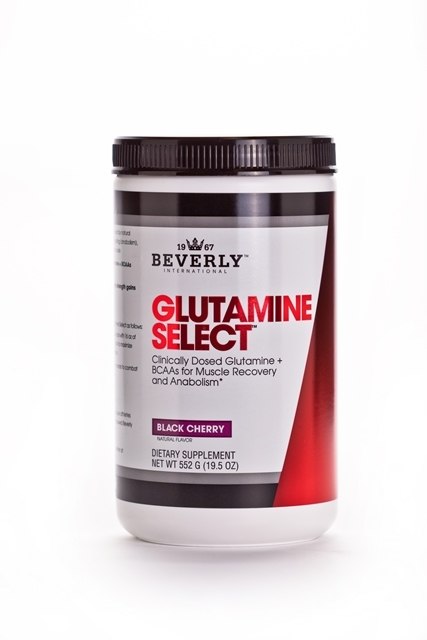 Improved Glutamine from Beverly is Glutamine Select Plus BCAAs

L-Glutamineis the most abundant free amino acid in muscle tissue. Intense and exhaustive exercise depletes the body’s glutamine stores. Your body cannot make enough glutamine to replenish your muscle’s amino stockpile – the result – compromised recovery and increased risk of over training.Recent research has shown that consuming glutamine following exercise can improve muscle glycogen resynthesis and glutamine levels. Its key action is to replenish stores in the muscles and increase protein metabolism for growth and recovery.

Beverly’s L-Glutamine contains 100% pure, pharmaceutical grade L-Glutamine and nothing else.

GLUTAMINE SELECT is a powdered drink mix consisting of the amino acids glutamine, leucine, isoleucine and valine. The latter three comprise the branched-chain amino acids (BCAA). The development of GLUTAMINE SELECT rests on substantial scientific grounds. By partnering glutamine with BCAA in quantities clinically-suggested to be effective in bodybuilding athletes, its anabolic energy can finally be uncapped.

This uniquely energizing effect is something you can only fully appreciate by trying GLUTAMINE SELECT for yourself. Each ingredient in GLUTAMINE SELECT has been tested and reviewed for safety and purity. Beverly’s product development is making GLUTAMINE SELECT the very best tasting formula of its kind by using a proprietary cherry flavoring system.

BCAA Powder – Black Cherry: supports the fastest possible improvements in the appearance and performance of your physique by tackling a little known but pervasive condition known as “anabolic fatigue”.

Protein synthesis is the essential element of building muscle along with glycogen, though less important, is hardly non-essential, particularly for athletes. For instance, scientists have determined that when your muscle cells depleted of glycogen, protein synthesis slows down and muscle atrophy (shrinkage) becomes much more likely. Just think of how flat, and out of shape, your muscles look (and how sluggish they feel) when they are low in glycogen, such as occurs when you eat too little carbohydrate. The amount of glycogen inside your muscles can even affect your vascularity.

Anabolism is very energy-intensive, like climbing up a steep hill. Approximately 1 out of every 5 calories burned by your body is used to drive protein synthesis, for instance, yet bodybuilding athletes demand this and other anabolic processes from their muscles 24 hours a day, 7 days a week. Resulting in a condition known as “anabolic fatigue” that lasts days, weeks, months or years. Anabolic fatigue can impair your ability to recover from your workouts and experience the gains in lean muscle mass and strength that you expect.

As an energy precursor, Beverly’s scientists suspected that glutamine might help alleviate if not prevent anabolic fatigue in muscle cells, thereby enabling protein synthesis, glycogen synthesis, and the anabolic process to proceed at speeds not otherwise possible. However, glutamine can’t alleviate anabolic fatigue all by itself, the scientists observed. Its role as an energy precursor is affected by the availability of other amino acids, some more than others. Thus, they predicted that supplementing the diet with glutamine by itself wouldn’t be the best plan of attack for a bodybuilding athlete to undertake. Doing so would only serve to cap what they referred to as its anabolic energy”. It was at this point that they began searching for other amino acids to partner with glutamine to uncap this potential.

Powdered drink mix consisting of the amino acids glutamine, leucine, isoleucine and valine. The latter three comprise the branched-chain amino acids (BCAA). The development rests on substantial scientific grounds. By partnering glutamine with BCAA in quantities clinically-proven to be effective in bodybuilding athletes, its tremendous anabolic energy can finally be uncapped, enabling users to achieve levels of muscle protein, glycogen, mass, strength, and hardness not possible by relying on the diet alone. This uniquely energizing effect is something you can only fully appreciate by trying for yourself.

Each ingredient has been tested and reviewed for safety and purity. Finally, Beverly’s R&D scientists left no stone unturned in making the very best tasting formula of its kind by using a proprietary cherry flavoring system.
1. Clinically-proven quantities: Large quantities of glutamine and BCAA are required to produce the effects sought by bodybuilding athletes, such as increases in muscle mass, hardness and overall performance, and faster recovery from training. Whereas some glutamine supplements contain only glutamine, each serving supplies 5 grams of glutamine plus 3 grams BCAA. These are the same quantities of glutamine and BCAA shown to improve the effectiveness of whey in resistance trained athletes (Colker, 2000) [see more references below]. Whey regarded as the most anabolic protein in the world. Subjects in the Colker study who received the whey fortified with glutamine and BCAA gained approximately two pounds more of muscle and doubled their strength as compared to those receiving regular whey only. These findings strongly suggest that glutamine and BCAA increased the anabolic energy of whey.
2. Pharmacologically-active form: The glutamine and BCAA are free, i.e., not bound to proteins. In this form, they can produce pharmacological actions not possible through the consumption of food. Though glutamine is abundant in many protein supplements, typically it is protein-bound glutamine, which cannot raise plasma glutamine levels as quickly as can free glutamine. A study published in the International Journal of Sports Medicine (van Hall et al. 2000) found that a drink containing free glutamine doubled plasma glutamine levels in trained subjects, whereas plasma glutamine levels were not affected by the consumption of either a wheat protein hydrolysate (providing 26% glutamine) or a whey protein hydrolysate (containing 6.6% glutamine). Wheat protein hydrolysate is sometimes added to protein powders and other supplements to increase their glutamine content.
3. Refreshingly delicious taste: Beverly’s R&D scientists used a proprietary Cherry flavor and Wild Berry system to make Glutamine Select taste as pleasant as it is energizing.
4. Tested and reviewed for safety and purity: All of the ingredients have been tested and evaluated for safety and purity. The glutamine and BCAA, in particular, meet United States Pharmacopeia (USP) standards.
5. Less than $1 per serving: Costs less than $1 per serving. Compare this to the potential gains in muscle protein, glycogen, mass, strength, and hardness. They are priceless.
6. The anabolic energy that never crashes”: gives users real and lasting increases in anabolic energy levels that, unlike stimulant-containing products, do not come crashing down.

Uncap Glutamine’s Anabolic Energy. Unleash your Bodybuilding Potential. Glutamine is an incredibly versatile amino acid. However, its role as an energy precursor, and, thereby, a source of anabolic energy, is typically overlooked. It is this exciting role which renders it uniquely qualified to alleviate anabolic fatigue, a condition that may explain the disappointing results experienced by bodybuilding athletes of all kinds and calibers.

However, glutamine cannot alleviate anabolic fatigue all by itself. The availability of BCAA, in particular, limits glutamine’s powers as an energy precursor and driver of anabolism. Research dating back to at least the 1970s demonstrates that glutamine and BCAA are efficiently connected.

Be the first to review “Glutamine Select” Cancel reply