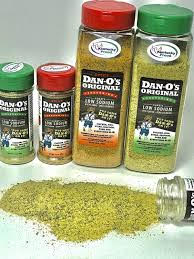 It all started in Louisville, Kentucky, Dan’s hometown. Cooking and creating flavor has always been Dan’s passion. It was in 2014, when he used his chicken herb and spice recipe and prepared a roasted chicken. It Was on that day that his friend mentioned that it was the best chicken ever, and Dan should share his recipe with the world. Dan Oliver had the “light bulb moment” and came up with the name and said “I will call it Dan-O’s”

When Dan started to take measurements for the recipe, he then discovered Dan-O’s was low sodium and packed with quality herbs and spices. This is when he realized what he had created had to become more than a hobby, and this recipe could change the world. He then also started experimenting with Dan-O’s on all other foods; steaks, fish, pork, sea foods, soups and sauces. Dan-O’s is the most versatile seasoning on the market, Dan-O’s is full of herbs and spices with the right amount of natural Sicilian sea salt, and no sugar or chemicals. Dan-O’s is nothing like the typical store-bought salt, sugar and chemical filled seasonings.

Dan-O’s Mission is to become a household name across the country as a better healthier option and have every man, woman and child saying

Be the first to review “Dano’s” Cancel reply